Transitional vs. Switchable Smart Film: What Do Your Windows Really Need?

Transitional vs. Switchable Smart Film: What Do Your Windows Really Need?

Transitional and switchable film may seem similar on the surface, but both options offer very different features and functionalities. Both are some of the industry’s most advanced window films that offer dynamic, transformational capabilities, however, when looking at how each of these window films function and what benefits they provide, switchable film and transitional film each cater to very different needs.

Switchable film, commonly called “smart film,” uses electrochromic technology to allow users to manually switch glass from a transparent to an opaque state. Switchable glass film is often applied to interior glass walls, windows and doors, as it provides a dynamic layer of privacy when needed. It can also be used as a backdrop for projectors and other means of collaboration.

From brands like Gauzy, Smart Tint®, and Intelligent Glass, there are a number of different switchable films on the market. Although some of these options do not require professional installation, the features these products offer can greatly vary. For example, one of the biggest drawbacks in certain “smart film” solutions is the inability to reduce solar heat gain and protect against UV transmission through glass. Similarly, most switchable films are battery operated, thereby requiring added maintenance over time.

Most projects involving switchable film are interior glass applications, such as commercial office buildings, governmental agencies, and educational facilities. While these unique films provide transformational qualities required for privacy, they often lack the sun and temperature control capabilities that transitional film delivers. At Window Film Depot, we educate customers about switchable smart film and which products are ideally suited for their needs. 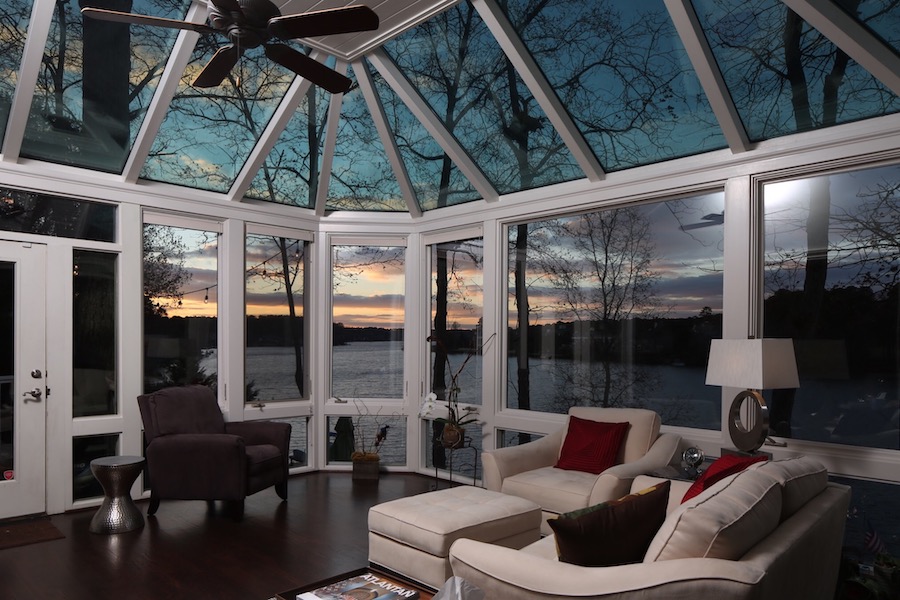 As the name implies, transitional film changes from a clear to a darker tinted state, but only when exposed to the sun’s UV radiation. By effectively adapting to the amount of sunlight coming through glass windows and doors, transitional film delivers concentrated levels of sun control, only when needed.

The most popular product in this class is CoolVu Window Film. This film uses a proprietary method to create a stable photochromic reaction in the instance of UV transmission. One could argue that transitional window film is inherently more intelligent than “smart film” because it automatically adapts based on the level of sun exposure it’s receiving.

Perhaps the most compelling quality about CoolVu Window Film is that it selectively filters solar energy, blocking out 99% of the sun’s UV radiation and over 80% of the infrared heat gain through glass. In turn, most CoolVu installations can pay for themselves within 3-5 years, depending on a building’s design and the climate in which it’s located.

Which Window Film is Better?

When it comes to sun control capabilities like blocking the solar heat gain and damaging UV rays, transitional film is the obvious winner. In the context of privacy, switchable “smart film” may be more appropriate. However in some cases, using both transitional and switchable film can actually make sense. For more information about these types of window films and other glass treatments, contact Window Film Depot to get a free estimate.